A Visit From An Old Friend

October 20, 2019
Last night we went and saw the movie Western Stars with a couple of good friends. These friends are music lovers just like us, so when we saw that it was coming out, we set the date. We're all big Springsteen fans, and they had never seen him in concert, so thought this would be the next best thing. 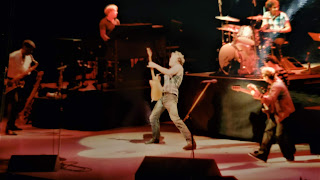 I've seen him in concert twice in the 80's when he was in his prime. The first time was for The River tour. I went with some friends and were treated to one of the best concerts I've ever been to, and I've seen a lot of them. The second time was for the Born in the USA tour and again he did not disappoint. Both concerts were pushing 3 hours in duration. It was amazing and set the bar for every other performer I've seen, a bar that few if any have hit.

I know not everyone is a Springsteen fan, and that's fine. But regardless of what you think of his music, you cannot deny his legacy of songwriting and performing. His songs tell stories and are in every sense of the word, poetic. I remember when his Nebraska album came out - it was an entirely acoustic album, after a half dozen rock albums had established his name as one of the best. Lots of people panned the album. I happened to love it. Lyrically it was all Bruce, and I totally understood his need to stretch creatively.

So the movie was a concert he put on in his barn with a full orchestra and band. The music was entirely his new album, Western Stars, that has a country and Americana feel to it, mixed with a bit of Neil Diamond epic ballads thrown in. It's growing on me. In between each song, was a voiceover explaining each song. These snippets were accompanied by sweeping vistas of the American Southwest and or people interacting. His stories were authentic and provided some great glimpses into the heart of people and this country. It was a great movie, and I recommend it.

And of course, as with all of my rock heroes, he's showing his age (as am I!). He's 70 years old, and looks 55. But along with Bob Seger, who I saw last December, I can't think of a rock star who I looked up to as much as those guys. They are storytellers, phenomenal performers and yet vulnerable to the passing of time, just like you and I. 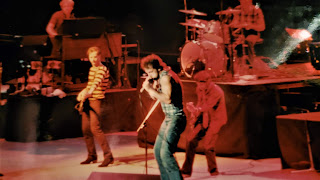 But for one night, it was great to see him back making music (albeit as a movie.)

He's still and always will be The Boss.