October 17, 2019
It seems I have another book in the books, so to speak. I finally got my cover for my newest chapbook, Genetically Speaking: Poems on Fatherhood, from my publisher, Local Gems Press. After the last of my textual edits, they've sent it off to press and I should be receiving my copies in three weeks. Huzzah!

For those who don't know, my other collection, Thoughts from a Line at the DMV, came out a couple of weeks ago. (It's been a very good year). I was waiting for this one to come to completion so I could schedule a dual-book release in November. Watch for details on that, tentatively pending for Nov. 16th or 23rd. 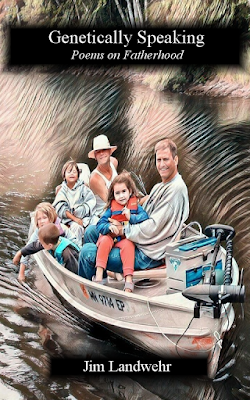 The book came about through a NaPoWriMo contest by Local Gems Press back in April. Poets are encouraged/obligated to write a poem a day for the whole month. Then, at the end of the month, we were supposed to submit our manuscripts for consideration. I was a "honorable mention" that also got an offer of publication. Thus, Genetically Speaking was born.

The book comes at fatherhood from all dimensions. If you know my background, you know my father was killed at a young age. Many of the poems address that experience - all the questions and subsequent angst that comes with such a tragedy.

Twelve years later, my mom remarried and suddenly we had a "stepfather," who also appears throughout the book. It looks at all of the struggles of living with a dad who is not blood but fills the role of one and comes bringing some issues.

And then there's the father in-law experience that comes with any marriage. The father by default whose traits you sometimes see in your spouse sometimes and suddenly things make more sense.

Sprinkled throughout are poems about the father-figures in my life. I'm talking about friends who've mentored me, a brother who helped fill in where a dad should have, and those I admire for adopting children, a selfless act that exceeds my own fatherhood experience.

This one is not filled with as much humor as my poems of the past. Fatherhood is not all laughs and humor. Some are tragic for people and for those people I mourn. Mine was mostly good - what little of it I had. And of course there is a ton of reflection on my own fatherhood experience, a source of unending joy in my life.

So, without giving more about the book away, I have to say, keep your eyes peeled on my website and social media for details on the signings. I hope to schedule one for Minnesota as well as a handful in Wisconsin.
book Family fatherhood genetically speaking local gems press poetry