Having Fun With It

November 24, 2019
Yesterday I launched my two new books into the world. In a sense, I had a twin birth. Though these twins are as different as my own two biological kids. One serious, self-motivated and introverted, the other creative, whimsical and a socialite. 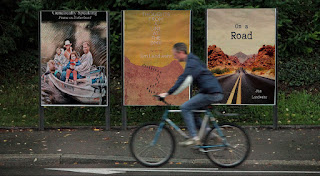 I've been looking forward to debuting these two books since about June when I found out I would have two released at the same time. By the grace of God, I received my copies of Genetically Speaking on Wednesday of this week, just in time for the Saturday event. My publisher assured me they would be here probably by the 21st. I worried myself sick until they came on the 20th. God has a sense of humor sometimes.

There was a great crowd at Cafe de Arts, I'd estimate there were more than for The Portland House debut. I was pleasantly surprised by a few faces I had not expected to show up. These are the little joys one needs to focus on in our day to day life. People coming out to support you on a hugely busy Saturday before Thanksgiving.

One of these was a fellow author and colleague, Nancy Jorgensen. She and her daughter Elizabeth both co-wrote a book, Go Gwen Go, about her daughter Gwen who won a gold medal in the Olympics for the triathlon. I've run into one or another of them at three different events recently and was so happy to have Nancy there. 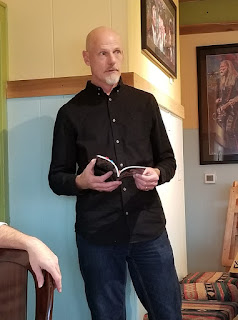 There were so many other surprise showings as well as the faithful dozen that show up to all of my signings. It was a great reunion.

I was humbled by Kathie Giorgio's heartfelt introduction. At one point she referred to me as a "reluctant hero" which I thought was an interesting term. I'd never heard it before, but it seemed appropriate, I guess. I never expected to have one book to my credit, so these last couple have come as sort of a wake up call to the fact that I've built writing into my life. She and her studio got me into this whole writing gig and I've never looked back. I think I'm a better person and have a richer life because of it, so am grateful to the AllWriters community.

The reading went really well, save for a spilled bottle of water that I clumsily tipped over during my talk. The poems were well received  and the audience seemed engaged with their laughter and attention. I first read from Thoughts from a Line at the DMV and finished with half a dozen books from Genetically Speaking: Poems on Fatherhood.

There was a mix of humor and heart throughout the reading, something I like to do to keep interest, but also to show people that I have a serious side to my writing. One never knows what people really think until it's over or until weeks later when they say, "I really enjoyed your reading a while back." We writers perseverate on the perception of people, so to hear a positive comment after the fact is uplifting to say the least.

All in all it was a fantastic afternoon with friends over coffee. Great thanks go out to all of those who showed as well as those who wished me luck despite not being able to make it. A gracious thank you to Ayhan Munzur for opening his shop, Cafe de Arts Roastery for the event. Purveyor of the best coffee in Waukesha, and always a gracious host.

To anyone looking to get books, please email me and I will mail them for the cost + shipping. They make great holiday gifts!

Yes you sure can. Please let me know how to reach you. My email is on my profile somewhere. Please try there!