November 14, 2019
Yesterday was GIS Day. For those who don't know, GIS stands for Geographic Information Systems. And if you don't know what that is, you probably don't know what GIS Day is. Well, I'm here to tell you. 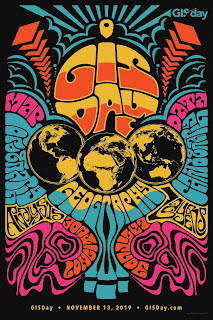 GIS Day is a day focused around getting the word out about GIS, what it is, what it can do and why we need it. The running joke is that it is an ESRI sanctioned holiday. ESRI is the company that makes the most-used GIS software in the world. They are based in Redlands California and I actually have a niece and nephew that work for ESRI out there.

The owner of the company is Jack Dangermond, a  Forbes billionaire who is as down-to-earth as they come. I've had the opportunity to meet and talk to him on a few occasions. In the GIS circles, he has a cult-like following and he makes it a point to meet as many users as he can at their annual Users Conference in San Diego. He's a big deal - at least to us GIS folks.

Anyway, I decided we should do something in recognition of GIS Day at work. Sometimes people remind me that we are a little known entity at the county, so I wanted to make a point of getting the word out. So, my team and I put together a weeklong event called GIS Awareness Week. It features daily presentations on a variety of topics and is aimed at getting the word out about some of what we do in the Land Information Office. The presentations showcase applications, maps and data.

So far we've had a great week of interacting with other GIS users at every level. I have said it before, but I LOVE my job. I love telling people about GIS and using it to help people do their jobs better. I consider myself incredibly fortunate to be able to say I have spent my entire career in mapping and GIS. I have met a ton of great colleagues, smart folks who love the business as much as I do.