Beyond Turkey and Pumpkin Pie

November 28, 2019
Thanksgiving has always been a little bit of the prologue holiday for me. The warm-up act before the headliner Christmas. The holiday with a dash of a letdown. I remember as a kid, appreciating the fact that we were all together as a family, but when all was said and done, what was the point of a big, delicious meal, if there was no gift exchange afterward. Of course, my thinking was antithetical to what Thanksgiving was all about, namely being thankful for everything. Your family, your house, your school, your government and even the food before you. 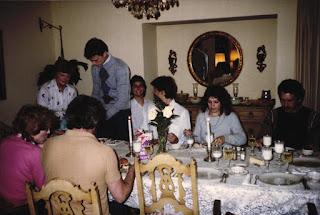 As a kid, those holidays were always big affairs. Of course everything seems bigger when you're young. A couple of times we held it at my grandmother's community room at the Lexington Apartments on Jefferson Avenue. She had some of the affair catered and for some reason, my wife remembers the chef in charge of cutting the turkey had a missing finger, victim of his own knife skills perhaps.

My cousins from White Bear Lake came to these "off site" Thanksgivings and between the two extended families and kids, it grew into a mob affair. The football game was always on the TV and one year even featured the Vikings and Cowboys - It may even have been Herschel Walker years - it's unclear. In any case, it never felt completely the same as when mom or Aunt Helen hosted the holiday.

Thanksgiving on those years at the Portland house set the bar for how to do a  big family dinner, and Mom did it with middle-class elegance and grace. She'd put the bird in the oven at 10:00 it seems, sometimes maybe earlier, it's unclear. She always cooked the dressing inside the bird with sausage and spices that made it moist and delicious - a point of contention amongst those that prefer it cooked separately. I'm sticking with what I know - inside the bird deliciousness. 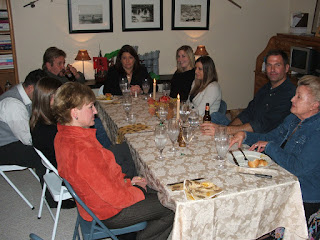 Everyone invited to Thanksgiving was charged with bringing a dish of some sort. In the later years when we were all adults, my sister Pat became known for bringing the "Green Stuff", a Cool Whip, marshmallow fluff, pistachio pudding concoction with maraschino cherries and other surprises in it. It's a dessert/non-dessert travesty of a recipe, but for the sweettooths in the family, it is a favorite. I love the Green Stuff and eat mountains of it every time I get the chance.

My other sister Jane has built her Thanksgiving notoriety on her dessert selections. She not only overwhelmed the table with a selection of goodies, but she always made enough so everyone had their fill + seconds. The display was photo worthy and a bit of a miracle considering she had three kids to take care of and keep out of dipping into them before the trip to Mom's.

Younger brother Paul always brought his trademark vegetarian lasagna, offering a meatless option for those so inclined. I think it was the product of a spell where he was vegetarian, but I think he's since reverted back to his carnivorous tendencies (though somewhat more selective). 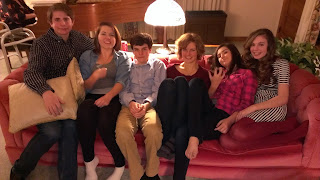 The rest of the family filled in around the edges. Grandma Dagney always brought the much dreaded oyster casserole, an unsavory combination of oysters, mushroom soup, green beans and Lord-God-in-heaven knows what else. My stepfather, Jack, once complimented her on them and she took that as a sign to bring them every year. The adventurous among us would dip into them only if coerced by Mom out of courteous obligation. We recognized that they were prepared with love and good intentions, despite the appearance otherwise. After she passed, they've become the running joke every year.

In the years since Portland, the affair has moved around the family, from sisters to brothers. It has landed squarely at the eldest brother, Tom's house the past number of years. He has a split level house that is conducive to breaking up the mob a bit and spreading the noise and chaos to two levels. 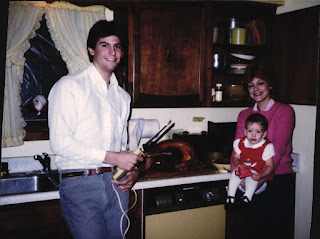 And it seems no matter where the affair is held, it is always shrouded in the love of family, siblings, cousins, grandkids, in-laws, outlaws and friends. There are conversations on who's graduating, who's pregnant and the trials of young parenthood. The uncles tend toward job issues and trials. the fishing season of the past year, the Vikings playoff hopes and the environmental cause of the day. No real problems are solved, but it feels good to have someone who's been there listen for a while over a beer or pumpkin pie.

Because that's what Thanksgiving is really all about. It's not so much the food as it is the person across the table from you. It's taking a few hours out of our frenetic lives to say, these are the important people in my life. And from year to year, the faces change. As a family, those of us in Wisconsin only make it every other year. This year my nephew Nick is in the Middle East in service to our country in the Air Force. He will be missed, especially by his wife and new little boy, Roy, named after his great grandfather, another soul not around the table.

So as you gather with your own family this year, be sure and look around and take it all in. Because if we are not thankful for what we have today, we are probably doing it wrong.
Happy Thanksgiving All!

Blogging off...
2019 landwehr memories thanks thanksgiving the portland house