The Festival Of The Bookish

November 03, 2019
Yesterday was day 2 of the Southeast Wisconsin Festival of Books, arguably one of my favorite days of the year. This was the 10th year of the festival and it featured over seventy authors presenting about their work, the writing process and what's next. 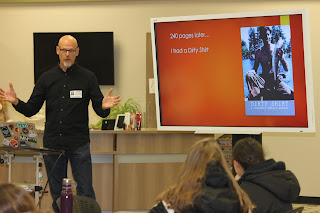 This festival always starts on Friday by hosting a series called Authors in the Schools. It features sending over a dozen authors into area high schools to talk to students about writing.

I've been a part of this for about four years now and have come to really enjoy it, despite my loathing of the spotlight. It's become clear to me that if you do enough of this you can achieve a comfortable level of discomfort in front of a crowd.

Laughter from the crowd helps.

This year I spoke to 55+ students from an AP Composition class at New Berlin Eisenhower High School. The talk went very well. I spoke for 55 minutes and took questions for 5 minutes. Students were courteous and engaged and none fell asleep, a plus for sure. The coordinator was kind enough to treat me to lunch as well. Perhaps the coolest part of it all though was the fact that they bought 5 of my books and put them into the library system. 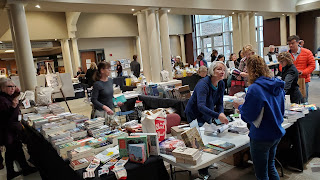 Then, Friday evening and yesterday, I spend the day with colleagues, friends, authors and poets from all around Wisconsin at the book festival. Friday night featured Andre Dubuus III, author of House of Sand and Fog. He was an incredible speaker and I really enjoyed his keynote. He talked about how his tough upbringing in a violent, poor, lower middle class area of Massachusetts turned him to writing. He also described how he has a soundproof studio where he goes to write for 3-4 hours a day and starts every session by reading a poem to get his creative juices flowing.

Saturday was a full day for me. I started at a session on memoir by Lila Schwenk, Julie Beekman and Nancy and Liz Jorgensen, mother and sister of Gwen Jorgensen, the US Olympic Gold Medalist at Rio in 2016. It was fun listening to the struggles of other memoir/nonfiction writers. It's good to know I'm not alone out there struggling to tell the story correctly without offending family and friends. I also bought Go, Gwen, Go, the book about the Gold Medalist because the story sounds so compelling.

The rest of the day was filled with words and friends. I had the privilege of moderating three accomplished poets, Angie Trudell Vasquez, Fabu, and Drew Blanchard, who read from their books and talked about their inspiration.

It was interesting to hear their stylistic differences. The poem that hit me hardest was by Fabu and repeated the line about an "Unnamed negro from Green Bay..." that spoke about the death of one of the first black residents in Wisconsin. She spoke about the 400th anniversary of the arrival of the first slaves on American soil from Africa. Some tragic visualizations and powerful words. 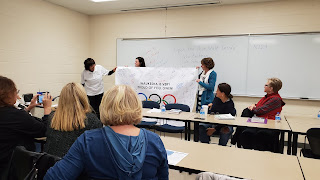 The day was filled from end to end. The last session myself and others read from the Bards Against Hunger poetry anthology put together by Ed Werstein. Again, some heart wrenching poems about hunger and poverty at the local level. Poetry speaking the truth and seeking social change.

A lot of thanks goes out to the many organizers, sponsors and volunteers of this great festival. I sat on the program committee and saw firsthand the amount of planning that goes into it. It is a credit to Barry Wightman and the rest for putting on a first class festival.

I can't wait for next year.