Patience in the Tempest 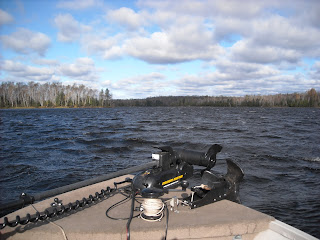 I spent much of last weekend fishing for musky in the northern reaches of Wisconsin. The weather was, oddly enough, very fall-like. We left from Waukesha on Thursday morning in a steady drizzle and drove for 5 hours in an almost constant rain. My friend who went with admitted he was in a funk and a bit on the cranky side. We got up to Presque Isle about 2:00 and the rain just kept on coming. It rained so hard and long that we didn't even get a chance to fish on Thursday which was part of the reason behind leaving early. We hung out and watched baseball and football that night with the intention of getting a full day of fishing on Friday.

Friday we woke to high 40's and a light rain and winds gusting 20-25 mph. We got our warm clothes on and covered it with our rain gear. We committed to trying one lake and if that was too choppy or slow fishing, we would try another. We stopped in town and got some live bait, sucker minnows that were $7.50 each. (Yikes). These are big fish, in some cases more than 12" long. Ours averaged 9". The saying goes, "You want to catch a big fish, you have to use a big fish." Sounds logical to me.

We launched on the first lake found a protected shoreline and fished for an hour or so. Then we tried a couple of new spots and proceeded to buck the wind for another hour. Steve's funk continued and he said we should get off this lake, get some lunch and try and adjust his attitude.

After an appetizer sample of fried food and a beer at the Pea Patch Steve seemed to be in a much better state. We headed over to the other lake and launched. We again found a protected shoreline and trolled for a while with no luck. The rain was intermittent, but light most of the time. Because using a trolling motor is forbidden in the waters we were in, we row-trolled. This can be tough in wind, but we were fortunate to have found enough protected shoreline that it wasn't too bad.

We moved to a new location and after an hour and a half were starting to get the feeling that we might be out of luck.

Then the ticking started.

The ticking of the reel usually signals that either a fish is on, or you have a snag. "Fish on!" Steve said. Because I was busy casting and preoccupied, it took me a second to realize that he wasn't kidding.

This is typically when the chaos starts. These are big fish, and because they tend to pull the sucker around and  chomp on it a while, it gives you a few minutes to prepare the boat for the fight and subsequent landing. I reeled in my line and then reeled in the other sucker that we were trolling behind the boat. It's important to have nothing that could get snagged on the line of the caught fish. I get the net ready and Steve gets the pliers, towel and cameras ready.

There was some discussion earlier on who would get the "first fish." Typically we take turns and we usually get one each anyway. It was an unofficial agreement earlier that Steve would take the first fish because he put the most work into rigging up the suckers.

When it was go time Steve handed me the rod and said "It's Rob's birthday. Bring it in." I was moved that he was that willing to let me take the first fish and reach my goal of trying to catch a musky on Rob's birthday. That's what you call a good friend.

I reeled up the slack to the point where my rod tip was in the water, then reared back and set the hook. The fish was quite a fighter as it dove left and right on me. As I recall, it fought a little harder than my first big one two years ago. After a minute it was boat-side and it made one last lunge away from the boat when it saw the net. I reeled him the rest of the way in and Steve netted it. It was a beautiful 34" musky, small by musky standards, but after fishing for 6 hours, I am always relieved to see a fish on the end of any line. We snapped a couple of pictures and set it free. Catch and release is all we fish. These fish are too special to keep. One day it will be someone else's trophy picture.

An hour later we had another fish in the boat, a 30" Tiger Musky.

When that was released, we figured our luck had run out, so called it a day.

Through all of it I became painfully aware of how important it is to stay patient in life's adverse or stormy conditions. If you freak out, throw in the towel or lose your temper, you're likely to miss the joy and happiness that may be as near as the next hour. Any fisherman knows, the worst fishing is typically when the sun is shining and the sky is cloudless. If you tough out the storm, you'll be glad you did.

And glad I was.

I had caught one of the most coveted fish, a fish that was for years the subject of smack talk among the brothers and I had done it on my brother's birthday, while wearing a shirt that was given to me by his wife. In my eyes, there was no place I would rather have been on that crappy day. I was absolutely happy the whole day. Some would call me nuts, but none of it would have happened if I'd had enough sense to get out of the rain. 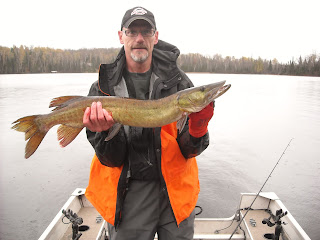