March 01, 2015
I went to the Admirals semi-pro hockey game on Friday night with my son Ben and his friend. My wife managed to notice the advertisement for at the bottom of her grocery receipt there was mention of three free tickets to a game. Thinking there would be a catch, I was fully prepared to have to buy one or more out of pocket when I got there. Turns out they were all free. Throw in a lucky free parking spot on the street and you have a great, affordable night out with the boys. 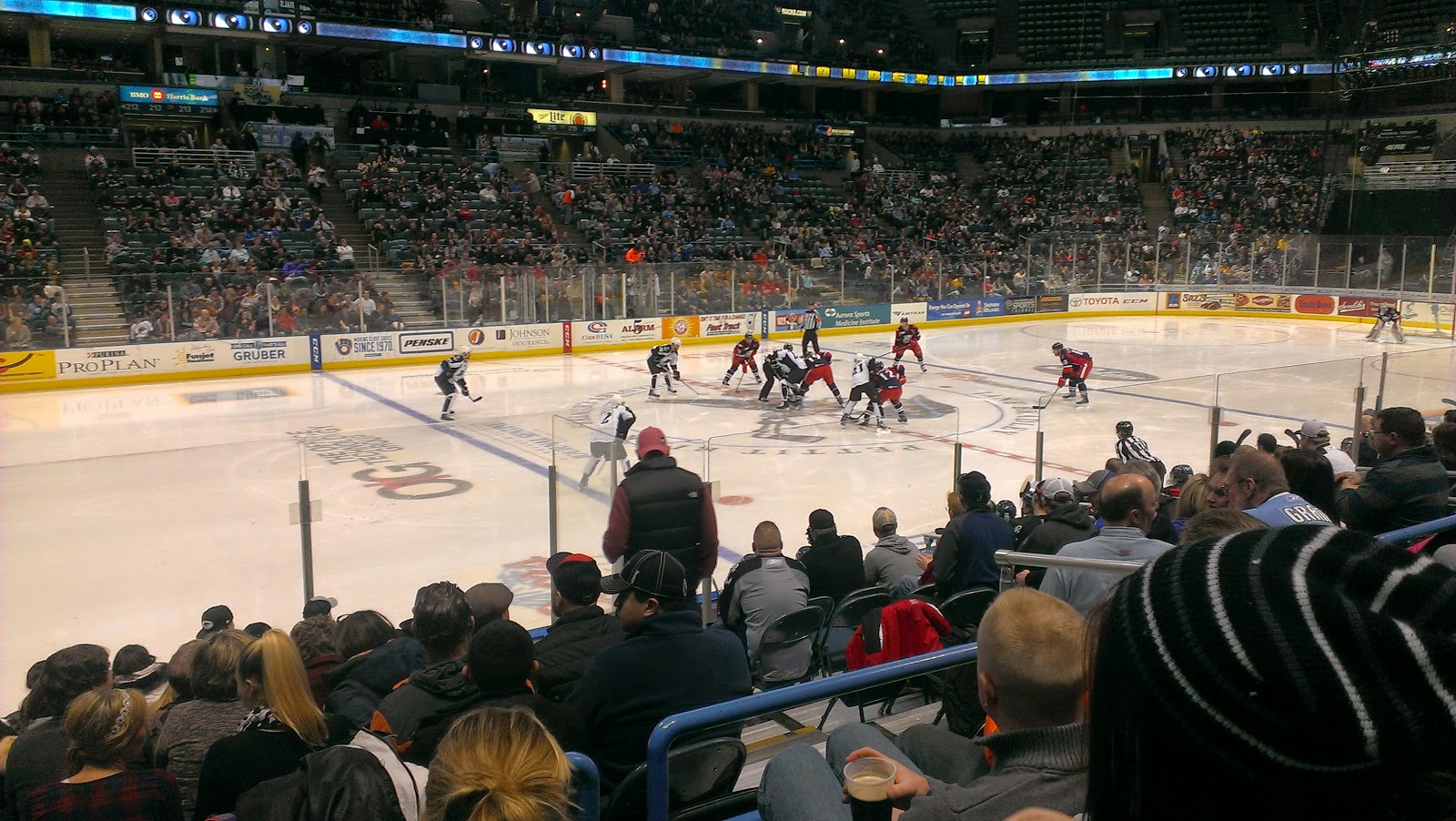 Now, I haven't been to an Admirals game in at least twenty years. I don't know why, I just haven't. I've been meaning to get Ben to a game for three years, so this was our chance.

Ben had been to a game about two weeks prior. A friend got him into a luxury box seat for free through the friend's father. I told Ben he'd been spoiled, and that any other seat would be a disappointment after that.

When I asked him how the game was, he said it was awesome. He said he really enjoyed it, "and there were three fights, dad." Of course, we all know fighting is part of hockey. I'm not saying I condone it or that it's a good thing, but like crashes at Nascar, it's part of the train wreck that the sport becomes at times. -And I say 'sport' loosely when I refer to Nascar, but I digress.-

During the course of the game, I was reunited a game that I love to watch. It is certainly my favorite spectator sport, surpassing even football. It's fast paced, physical and chaotic. I told Ben, part of the allure is taking grown men, putting them on a blade that requires balance on a slippery surface and telling them to skate really fast and bash into each other. Oh, and give them a hooked stick and make them slap a hard piece of rubber at each others shins, groins and sometimes faces.

Oh yeah, and then throw a couple of referees out there without any sticks and a lot less padding and make them get in the way once in a while.

Yeah, yeah, do that.

And make the walls of the place out of clear plexiglass that shudders like death when one of them is checked into it.

Yeah, yeah, and make checking legal. Make slamming into a guy in a corner at high speed legal in order to:
It's mad fun.

Yes it's violent, but so is football. I told Ben that as long as it wasn't my son out there getting his teeth knocked out, I was okay with it. Hazards of the job I guess you'd call it.

It also takes great skill and finesse at times. Watching these guys hit pin-point passes was impressive. And one of the goals I saw scored was nothing short of stupefying.

And the crowd gets into it too. When the Grand Rapids Griffins scored in the first period, a guy a few rows behind us shouted at the top of his lungs, "You guys still suck!"

It's a thinking fan's game.

He went on to repeat it a little louder three more times, as the Admirals lost 4-0. It got a little funnier each time, at least to my sixteen year old and his friend and I. Probably says something about my maturity.

But hey, when your team's down 4-0, you gotta laugh at something.

The other highlight was the human hockey puck bowling event at the end of the second period. Who says you have to be sophisticated to be a hockey fan?

Midway through the third period a fight eventually broke out and sent an Admirals player to the penalty box.

The key to the evening is I seem to have interested Ben as a hockey fan. He really likes it. We had some great laughs and unlike baseball, he kept focused on the game the whole time.

So I hope to see a lot more Admirals hockey in the future. Hopefully next time we'll even score a goal.