Eagles, Gophers and Badgers, Oh My

December 05, 2019
We had a great Thanksgiving weekend in Minnesota, despite a snowfall that went on and on and on. It was never debilitating, but certainly could be categorized as annoying.

After a nice dinner on Thursday, we hung out at the hotel most of the day Friday. I took a brief walk at a local regional park and had the privilege of seeing four eagles roosting in the same tree. One had flown off only seconds before I got there otherwise there would have been 5 in a picture I took. It was as majestic as it sounds; an almost spiritual experience. 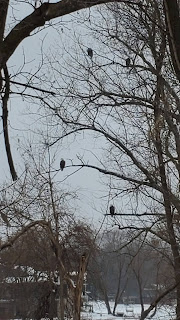 That night we had our traditional chocolate fondue with Christmas gift opening at our daughter's apartment. When we were younger, Donna's parents often came to town for "Thanksmas" where we celebrated Thanksgiving on Thursday and Christmas on Friday. Now that we have kids in other states, we are doing the same thing, it seems. The important thing has always been that we are together, not so much the date, so this is a great compromise.

On Saturday afternoon we watched the Gopher/Badger football game. As a gopher alum, I hoped for the best, but sort of had a feeling that they'd struggle with the Badgers, as they often do. It was an exciting first half, but true to form, the wheels came off in the second half as the Badgers rolled on to win it very decisively.

Much like the Packers, I've become a Badger fan due to proximity over the years, but I was really pulling for my Gophers this year. They've been so mediocre for so long, I thought this year might be different. Alas. Nonetheless, it was a great year and maybe they'll get some good recruits for next year. (Though I"m sorta sick of saying, wait till next year.) In any case, I'll now root for the Badgers to beat Ohio State and go to the Rose Bowl and for the Gophers to win whatever bowl they end up in. It's nice to have options.

In any case, Thanksgiving was a good warm up and I am looking forward to the Christmas season.