December 12, 2019
I took a county vehicle from work to a meeting downtown today. It was a Chrysler Pacifica. The vehicle has some interesting quirks for sure, some of which I found confounding and borderline ridiculous.

Now, I know it's highly un-American, but I've been a fan of foreign cars for years. To me they are better engineered, run longer and need less maintenance. The two American cars I've owned as an adult were fairly disappointing machines. The first, an 83 Escort that was ready for the junk heap at 90,000 miles (Head Gasket + a myriad of other less major issues.) The second a Plymouth Voyager, a slightly less disappointing machine that was ready for the junk heap at 112,000 mi. (Too many issues to list. Am happy they gave me anything for it.)

Because I've driven largely Japanese and Korean I've become accustomed to the layout and functions of the cars - not to mention they work well for a long time.

But I digress. I am talking about the Pacifica here and thought the layout of the thing was so bizarre it deserved mention.

Starting with the shifter, which is a big knob on the dash. Nice concept, but for me it is precariously close to the radio and heating control KNOBS. The last thing I want when I'm looking for a better station is to shift into Low gear and blow my engine up. Now, I trust they have controls in place to prevent drivers from doing this; Maybe an electrical shock if you touch the big dial while moving or something of the sort. I wasn't about to test it.

But my point is, why put it there in the first place? Was it ever a good idea?

Then there is the heater. The thing is driven by another knob with "Mode" printed on it. A bit unintuitive perhaps. It only took me about 5 miles of driving to figure out how the thing worked.

When I got going I realized there were two speedometers, one analog, one digital. I don't know if it they are covering the bases between the digital and analog ages, but I thought it was sorta stupid. Why not two tachometer readouts too? Heck, I'd settle for one good heater readout over the second speedometer. 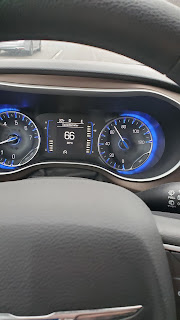 The seat didn't go back far enough for a guy my height - thanks Chrysler. Add to that my knee hits the console in front, so my options to stretch my leg are limited. Thanks again.

The light switch is yet another knob on the dashboard. I thought they did away with those about 15 years ago. I'm so used to it being on the blinker stick that it took me 3 minutes of looking to find it on the dash.

The county also gets their vehicles installed with back-up beepers for liability reasons. It's safe, but adds another level of annoying to an annoying vehicle.

There was one nice feature about the car. It has a little light that comes on in the side mirrors when another car is in your blind spot. It's ingenious. They need to pay that engineer more and have him redesign the entire dash.

So that's my review for the day. But don't let it sway you!