December 22, 2019
The Christmas tree I got this year looked bigger on the lot. It was a phenomenon similar to how fish look bigger in the water than when you get them in the boat. Or, it looked bigger in your imagination this year than it did in your boat six years ago when you caught it.

In any case we got a tree and after we decorated it and put the lights on, it looks fabulous. Sometimes smaller is a nice change. I know I'll thank myself when it is time to haul it out to the curb, so I have that going for me. 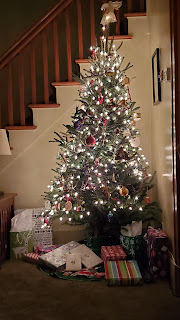 We have always had a real tree in this house, and even in the apartments we had before we became homeowners. We both grew up with real trees and never saw the reason to change. This year we gave a passing thought to an artificial tree, but passed on the idea. It has always been my job to pick out the tree and I don't really mind the task, so we can't use the excuse that it's too much work. The family used to come along with me to choose it, but that stopped about 6 years ago, so I go to Steins and try and get one in 15 minutes or less.

Shopping for them always brings back to mind the trees of my past. Mom always took one or more of us to get a tree. Usually it was at the YMCA on University Avenue in St. Paul, where they had a lot called "Y's Men's Trees." Because we didn't have a van, it usually meant tying it on top of the car. I do remember at least one trip home where we had to stop and re-tie one of the ropes because we nearly lost the tree. At least I think that's what happened. Maybe it was just a fear and I ended up making it real in my head.

There were many years we 'd catch the cat trying to scale the tree. One year it actually brought ol' Tannenbaum down when it was climbing. Mom walked into house one year after picking my brother Rob up from the airport to find it laying on its side. She was mortified. Of course we propped it back up, but no good Christmas tree ever looks the same after it's fallen. This was no different.

It did lead to a trend every year afterward of tying the top of the tree to the stair banister spindles using fishing line to keep the thing from toppling over. This is a tradition I've used on more than one occasion myself. No one ever sees it!

Back in the early 70's Mom used the big bulbs that clipped onto the branches and proceeded to get real hot. We never started a fire, but there was a carpet burn or two in there somewhere. Thankfully they went out of fashion before we managed to burn the whole house down.

The whole idea of bringing a tree into your house is pretty weird anyway, if you think about it. It is part of our tradition though, so as long as I can put up with the needles, the watering, and the tree-lot shopping, I plan to keep having a real one.