Panic Shopping In The '80s

December 19, 2019
There was a time when my brothers and I were all single and in college and living with all the irresponsibilities that come with those parameters. Paul and I lived at home and commuted to college at the University of Minnesota, while Rob was in New York at the Rochester Institute of Technology.

And I'm not sure when it started, but there were times when two or three of us banded together on Christmas Eve to do our Christmas shopping. It sort of defies any rational thought, waiting until the 11th hour to embark on getting presents for everyone, but as I said, we were young and untethered to conventional rules. 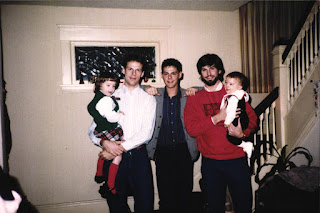 Our trips to Daytons or Rosedale Mall were usually launched on the downside of a couple of beers to get us in the mood to brave the insanity. When we arrived, we were usually in the company of other wide-eyed men looking frantically for a good sale or a size for something that sold out two weeks prior. It was a fraternity of futility, but we always made it happen, one way or another.

The best part about it though was spending time with one or both of them, laughing at the position we'd put ourselves in again. The three of us must have been a sight, twenty-somethings, all over 6'2" wandering the aisles laughing and price checking everything. It was an inexact science but reflected how much we really hated shopping and the whole mall scene - so much that we'd prolong doing it until nearly the final buzzer. We may have even capped off the spree with a beer somewhere on the way home, or maybe back at home during the wrapping frenzy.

My mom always celebrated Christmas on Christmas Eve. For many years we had her sister and families over, but it just got too big, so she retrenched it back into a family-only affair. With six of us kids and our eventual spouses and kids, that too grew into a mob scene, one that continues today, and we wouldn't have it any other way.

Those trips to the mall or a department store and all the camaraderie that goes with it have given away to online shopping via Amazon, which is sort of a travesty when I think about it. It's been reduced to a point and click thoughtlessness for myself and an entire generation. It might be a better, more efficient way of shopping, but it certainly won't be as memorable as those days in the aisles with the brothers.