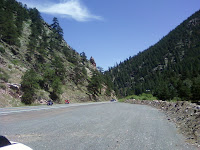 As I mentioned in my previous post, Colorado was amazing, fantastic, splendid and outstanding! It has enough natural beauty in it to keep you watching around every turn.

I had a couple of run-ins with the law during our 10 day stint in CO.

The first incident was while I was weaving my way through downtown Manitou Springs. The GPS had us taking all kinds of crazy turns in what did not look like the right direction. Donna took it off the suction cup holder and started futzing with it. I came to the bottom of a hill to what I thought was an uncontrolled intersection and then took a left. A cop was ahead of me and he pulled over to the side into a parking spot, and let me pass. Within 1/2 a block, he had his lights on and so I pulled over.

Donna and the kids looked back when he turned his siren on for a short burst. "Is he pulling you over?"

So as he's walking to the car, I reach for my wallet, which of course causes him to put his hand on his gun. In my trying to expedite my own arrest, I think I startled the guy.

He gets to the window and says "Do you know why I pulled you over?"

There was a red light at the bottom of the hill. You ran right through it."

"Yes sir. May I see your drivers license please?"

After five anxious minutes, he returned and says "They do have stoplights in Wisconsin, right?"

"Yes they do" I replied.

We both laughed. He asked where we were headed, I told him to the Pikes Peak Cog Train. http://www.cograilway.com/

He said he was going that way and we could follow him. Then he took off like a bandit and left me to find my own way, which I eventually did. Turns out we missed the noon train because of being stopped, but we ended up catching the 1:20.

The next day, we were driving along a mountain road at 5 over the speed limit and suddenly I look in the rear view and there are more cop lights. What the heck?

As I pull over on a highly dangerous section of mountain road, Donna says "What are you doing?"

"There's a cop back there."

"Again?" she asks in disbelief.

He gets on the mic-speaker and says "Please pull over to a safer spot on the road."

I pull ahead to the first available turn off and again reach for my wallet. Again, he checks his gun.

He comes up and says "Do you know why I pulled you over?"

"You veered over the white line on the shoulder and I just wanted to make sure everything is alright."

So then he takes my license, registration and proof of insurance (I was waiting for him to take one of the kids too, as ransom or something,) and headed back to the Cop Charger (Nice car!)

After another anxious 5 minutes he comes back and says that I'm lucky they're only ticketing for people crossing the YELLOW line today. He hands me a warning ticket and says "Have a great rest of vacation"

I say "Thank you, I will. Just grateful to be ticket free.

So in keeping with the three strikes and you're out theory, I kept the speed at the limit or for the rest of the trip.

I have to hand it to the CO law enforcement folks, they are some of the nicest I've ever run into. No one likes to ruin a vacation for someone who's travelled as far as we did.